Group Five Power International (G5), a wholly owned company of Group Five (SA) was selected as the Engineering Procurement and Construction (‘EPC’) contractor after a rigorous international procurement process. The EPC contract with G5 was however terminated on November 30, 2018 and the project completed by a technical team assembled from the shareholder group.

ECG is Cenpower’s major electricity off-taker, with a 20-year Power Purchase Agreement (PPA) for 325MW of contractual capacity. Electricity Company of Ghana (ECG) is wholly owned by the Government of Ghana and operates under the auspices of the Ministry of Energy as incorporated under the Companies Code, 1963 in February 1997. ECG is responsible for the distribution of electricity in the southern part of Ghana namely, Ashanti, Central, Eastern, Greater Accra, Volta and Western Region.

Cenpower has entered into a fuel supply and storage agreements with Adinkra (owned jointly by Vitol and Chase) for the supply, storage and delivery of Light Crude Oil (LCO) and distillate.  The Vitol Group was founded in 1966 in Rotterdam, the Netherlands. Since then the company has grown significantly to become a major
participant in world commodity markets and is now the world’s largest independent energy trader. Its trading portfolio includes crude oil, oil products, LPG, LNG, natural gas, coal, electricity, agricultural products, metals and carbon emissions. Vitol trades with all the major national oil companies, the integrated oil majors and the independent refiners and traders.

Chase Petroleum Ghana Limited, is a Ghanaian company headquartered in Accra and incorporated in 1999, is a leading bulk distributor of petroleum products. Chas Petroleum operations extend across Ghana with distribution depots in Tema, Kumasi, Buipe and Takoradi which was achieved through long-standing relationships with storage providers such as Bulk Oil Storage and Transport (BOST), Tema Oil Refinery (TOR) and the United Storage Company (USC). Adinkra has the sole mandate to procure, deliver and store Light Crude Oil and Distillate Oil on request by Cenpower Generation Company Limited.

Cenpower entered into a connection agreement with Ghana Grid  Company Limited (GRIDCo) to govern the establishment and  operation matters pertaining to the connection, at the point of  connection, of the Kpone Independent Power Plant (KIPP) to the  National Interconnection Transmission System (NITS).​

GRIDCo is responsible for the administration of the National Electricity Grid Code (Grid Code) which describes the responsibilities and obligations associated with all the functions involved in the supply, transmission and delivery of bulk electric power and energy of the NITS of which Cenpower is party as a Wholesale Supplier.

Operating as a natural monopoly in the transmission system in Ghana with the goal to provide a robust, secure and reliable electricity grid to support livelihoods and economic development, GRIDCo is also committed to playing a lead role in the regional and sub-regional electricity grid interconnection through the West African Power Pool (WAPP) initiative. It was incorporated on 15 th December 2006 as a Private Limited Liability Company after the successful separation of transmission functions from Volta River Authority (VRA). ​ 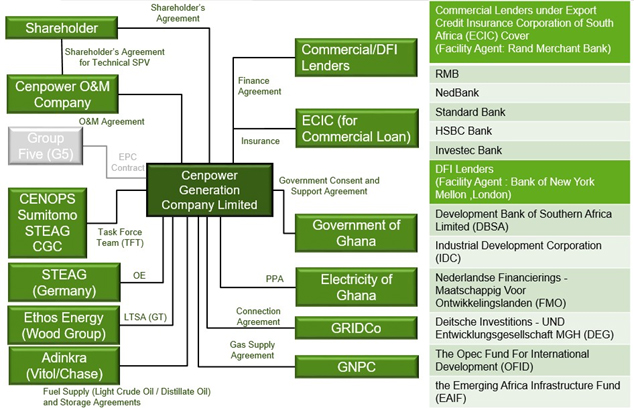