The Kpone IPP project was conceived by the Founding Shareholders, a group of Ghanaian entrepreneurs - Samuel Nana Brew-Butler, Dr Jimmy Heymann, Michael Wilson and Kweku Awotwi. In 2003, they incorporated Cenpower Generation Company Limited (CGC or Cenpower) as a limited liability company and the vehicle for the development of the KIPP project.

The project faced a number of developmental and financial hurdles, largely due to the fact that as Ghana’s first greenfield IPP developed on a Project Finance basis, there were no precedents.

Following the completion of initial feasibility studies, including site selection and preliminary engineering and environmental studies, InfraCo (a multi-donor funded project developer) joined the founding shareholders as a project development partner in 2005. Over the ensuing four years, several key development milestones were completed, including detailed engineering studies, social and environmental assessments, as well as negotiations for a Power Purchase Agreement.

The procurement process for an Engineering, Procurement and Construction (EPC) contractor was also initiated in this period.

In 2010, Africa Finance Corporation (AFC) acquired a controlling stake in Cenpower, becoming the project lead developer and lead arranger. AFC joined the founding shareholders and InfraCo, in the continued development and financing of the project. As lead project developer, AFC had overall responsibility for all project activities and the management of the development team, including the selection of the additional Project Sponsors as well as legal, insurance, financial and technical advisors.

In September 2014, InfraCo transferred its interests in Cenpower to Sumitomo Corporation, a Japanese investor company and the Strategic Technical Partner for the project and which formally became the second-largest shareholder of Cenpower Generation Company Limited after Africa Finance Corporation. 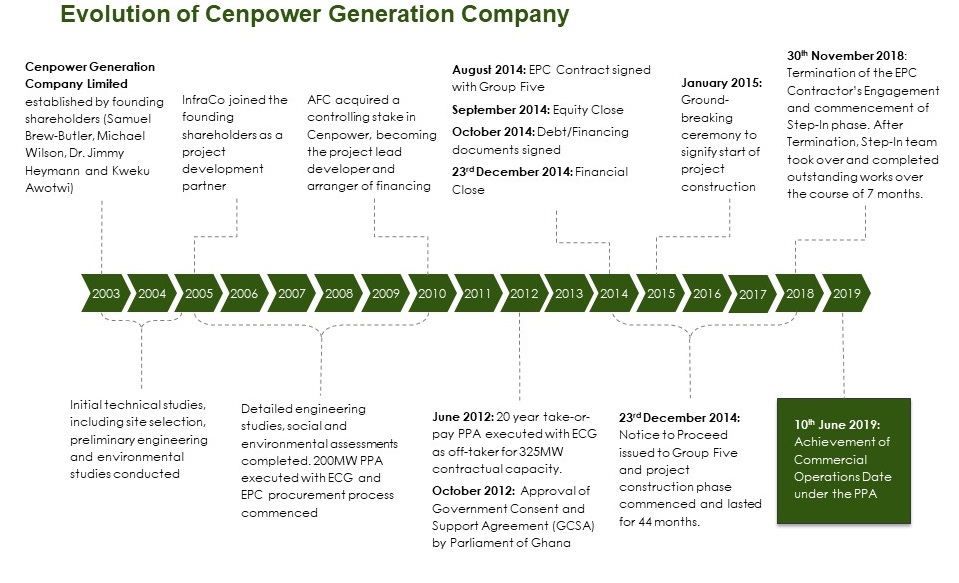